Use the Venison, Elk, Duck and Fish that hubby brings home, in family friendly recipes.

Also spelled Osso Buco: an Italian dish made with veal shank containing marrowbone, stewed in wine with vegetables and seasonings. 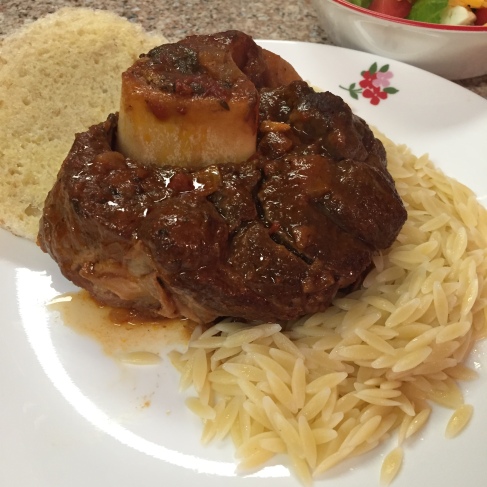 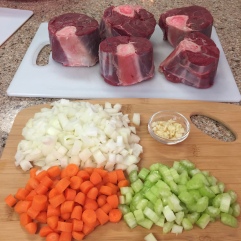 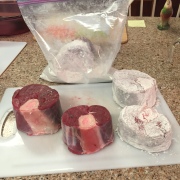 First of all you need to acquire the meat and bones. One of our mighty hunters brought in a large cow elk, so I decided it was time to give this a try. Now I will admit it doesn’t quite fit my mission statement of “family friendly recipes” in that it is a bit of work and though it pretty much tastes like pot roast, the look of it might be intimidating to kids. Nevertheless, here we go:

Cut the shin bone, meat and all with a butcher’s saw or band saw (my husband used his saws-all) into discs that are about 2″ long. The width of the meat will vary according to where you are on the leg. What I used were about 4″ across including meat and bone. They say it’s easier if it’s slightly frozen. We don’t have that kind of freezer space!

Dredge the pieces in the bag of seasoned flour and brown them well in a heavy Dutch oven or heavy pot, in what ever fat you like. I had duck fat so used that. Remove to a plate.

Nestle the shanks back into the pot of vegetables in a single layer. Pour the stock over just enough to cover, or almost cover the shanks. Put the lid on the pot.

Roast 2 hours more with out turning again. Check after 1 hour. Should be falling away from bone when it is done. Some of them may separate from the bone entirely. Won’t serve up as pretty, but still plenty tasty. Use a spatula to lift out.

Don’t forget to pick the marrow out of the bone’s center. It is so yummy. Hard to explain the taste, so be sure to try it. Very tasty on toasted bread.

You can eat immediately with rice, polenta or orzo, some crusty bread and a salad.

For the best flavor let cool in the pot, and put in the refrigerator until the next day.

Just reheat in the same put over low heat until bubbly.

Don’t get too hot too fast or bottoms may burn.

To give credit where it is due, I adjusted this recipe from the website: http://themeateater.com

Elk Osso Bucco
http://themeateater.com/2011/a-rinella-recipe-osso-bucco/
Cut the shin bone, meat and all (it’s easier if its frozen or slightly frozen) with a butcher’s saw or band saw into discs that are about an inch-and-a-half thick.
Serving sizes vary; a person might eat two or three pieces of antelope shank, but one disc of moose shank could feed two people. So let’s say we’re doing deer shank, and we’ll figure one piece of shank about 3” across for each person.
So for a dinner for four, take four pieces of deer shank and dredge the pieces in seasoned floor and brown them well in a heavy Dutch oven or heavy pot. When done, remove the meat and saute 2 medium diced onions, 2 cloves of minced garlic, 2 sliced carrots, and a couple stalks of celery for about five minutes. Then add in a tablespoon of tomato paste and a can stewed tomatoes or several fresh stewed tomatoes.
Sprinkle in some salt, pepper, crumbled sage, a pinch of thyme, some parsley, and whatever other herbs you think would be good.
Put the shanks back in the pot, laying them in a single layer. Pour in just enough water or stock (I prefer game stock, but you can use beef stock) to just barely cover them up. Cover the pot and put it in your oven at 275 degrees. Don’t even think about eating it until it’s been in there 4 or 5 hours. When it’s done, and fork tender, serve the meat and broth over polenta with a dusting of fresh minced parsley. Don’t forget to pick the marrow out of the bone’s center. You won’t be displeased.